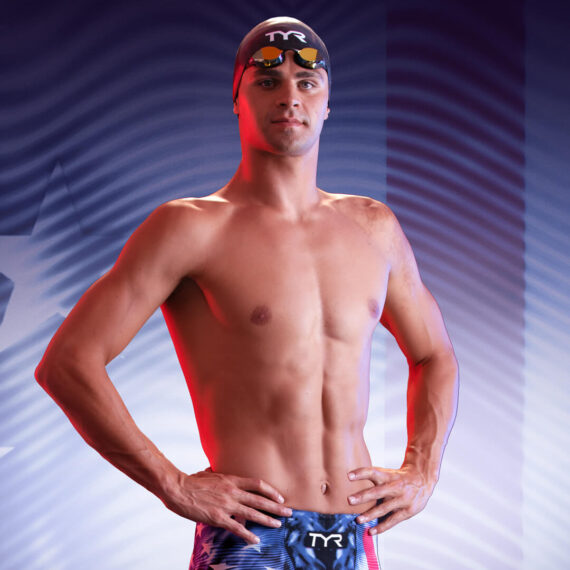 Brands he has worked with:

Andrew’s parents, Peter and Tina, are South African natives who moved to America in 1997. His father served in the South African Navy as a diver. His mother appeared in the British and South African versions of Gladiators, as Laser and Sheena respectively, and his younger sister used to swim.

His family lived in Aberdeen, South Dakota from 1997 to 2011, where Andrew started swimming at age 7 and competed for the Aberdeen Swim Club. Soon after, Andrew’s father decided he wanted to coach Andrew himself so his parents bought and converted a nightclub in Aberdeen into a four-lane pool so Andrew could train with Peter as coach, then purchased the building next door and made it into their home. The family moved to Lawrence, Kansas in 2011. As the house in Lawrence did not come with a pool, they built a shed and a two-lane training pool in the backyard where Andrew was coached by his father. In 2013, Andrew turned professional at the age of 14 and became the youngest American swimmer to do so. As a junior swimmer he broke more than 100 National Age Group records (long course meters and short course yards combined), more than any other American swimmer. Part of Andrew’s coaching by his father during his youth included training in a non-traditional way, using a method called Ultra Short Race Pace Training (USRPT), he has continued to train with this approach into adulthood.

Andrew was home-schooled as part of an online program through Liberty University for part of his teenage years after he turned pro in swimming. Taking a home-schooling pathway for education, he chose not to compete in high school nor collegiate swimming. When the University opened a pool in 2018, Andrew participated in the first event held at the pool, the 2018 TYR Junior National Cup, to be part of its grand opening.