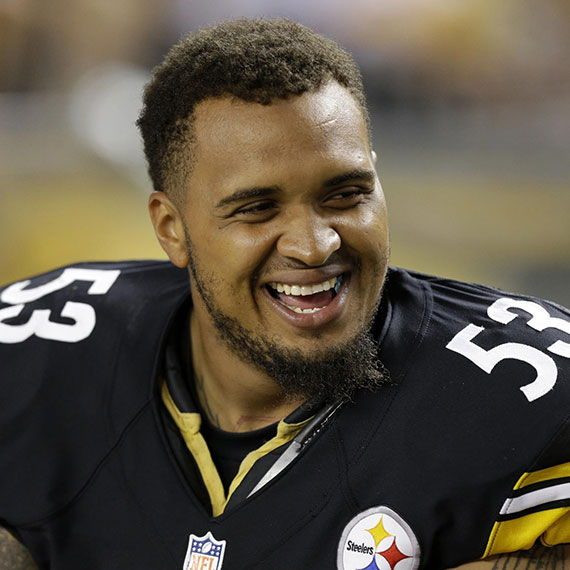 LaShawn Maurkice Pouncey (born July 24, 1989) is an American football center for the Pittsburgh Steelers of the National Football League (NFL). He played college football for the University of Florida, was a member of a BCS National Championship team, and was recognized as an All-American. He was drafted by the Steelers in the first round of the 2010 NFL Draft, and is a three-time Pro Bowl selection.
Pouncey was born in Lakeland, Florida. He attended Lakeland High School in Lakeland, Florida, where he was a standout lineman for the Lakeland Dreadnaughts high school football team. As a senior in 2006, he helped lead Lakeland High to its third consecutive Florida Class 5A state championship and second straight USA Today national championship.

Pouncey accepted an athletic scholarship to attend the University of Florida in Gainesville, Florida, where he played for coach Urban Meyer’s Florida Gators football team from 2007 to 2009.

Pouncey entered the 2010 NFL Draft as the consensus No. 1 center available, ahead of Matt Tennant, J. D. Walton, and Eric Olsen. The Pittsburgh Steelers chose Pouncey in the first round (18th pick overall). He was the highest selected center since Damien Woody in 1999, and the highest selected Gators offensive lineman since Kenyatta Walker in 2001.

His rookie year, he started in all 16 games played at the center position, and was selected to the Pro Bowl. Additionally, in accordance with his exceptional play as a center during his rookie year, he received 2 votes (out of 50) for the National Football League Rookie of the Year Award. In the AFC championship game during Maurkice Pouncey’s rookie year, Pouncey injured his ankle during the win and was not able to play in the Super Bowl.

Pouncey’s identical twin brother Mike Pouncey was selected 15th overall by the Miami Dolphins in the 2011 NFL Draft. He is one minute younger than Mike. Pouncey has a daughter, Jayda (born October 10, 2011).